Home » Your Car » Car performance specs: What do they mean?

Car performance specs: What do they mean?

Published: 12 March 2015 | By Azza Al Arabi
When you go to a car dealership, do you understand what the engine specs you are looking at mean?

When you read the specifications or “specs” of a car’s performance, do you find yourself completely baffled? If the answer is yes, you are not alone! Many UAE residents will go car shopping not fully understanding what they are reading and how it could potentially impact their final decision on which car to buy. So before you head down to a car dealership, take a moment to grasp these basic car engine and performance terminology. This knowledge will not only help you understand why prices can vary significantly on the same car make and model – it will also help you better understand what your car can do!

[Related: Buying a car in the UAE? Where to start]

For a car engine to work, it needs to ingest air so that it can burn fuel, turning it into energy for motion. This is called internal combustion. Generally speaking, there are two types of engines: those that are naturally aspirated and those that have forced induction. Although these terms may sound very complicated, their meaning is quite simple: aspirated engines “breathe” naturally which means that they rely only on natural atmospheric pressure for air. While forced induction engines use turbo chargers or superchargers to force more air into the engine, which then enhances its power output and performance. Now let’s have look at the different car engine specs that you will typically see at car dealerships.

[Compare car deals in the UAE and book a test drive]

1) Horsepower: This is the power output of the car’s engine. When the term was first coined in the 18th century by engineer James Watt, metric horsepower referred to the amount the amount of power required for a horse to carry an average sized adult man, for one meter. What does this mean to you? Simply put, the higher the horsepower, the stronger a car’s engine. For example, if you are looking at two identical cars in weight and form, but one has an engine with higher horsepower, this car will be faster.

2) Torque: Torque tells you at what rate the power of an engine is delivered. To understand what torque means, you need to first understand what power represents. Power in simple terms, is the rate of doing work. Torque is a rotational force that may or may not result in motion of an object. But when it does result in motion, it becomes work. For cars, it can be described as the pulling power of the car’s engine. The higher the torque, the more responsive a car is to either starting (from a standstill point) or at any point while the car is on the road. The more the torque the more power you have at hand at any moment from any range or RPM’s (revolutions per minute). RPM’s is what you see next to your speedometer, measured in thousands.

3) Engine capacity: you will see this represented in number of cylinders. For example a Volkswagen GTI engine has a 2.0, 4-cylinder engine. What does this mean? Inside each cylinder in a car engine, there are pistons that pump to generate combustive energy. The capacity of an engine is measured by the volume of oil required to fill each cylinder. So in a 4-cylinder, 2.0 litre engine, each cylinder will require 0.5 litres of oil. Some cars will carry a V6, V8, V12 or “inline” engine. A “V” engine just means that the cylinders are arranged in the shape of a V. These are variations of engine capacity and cylinder build and not all engines necessarily look the same.

4) Transmission: transmission is required for power to reach the wheels of your car from the engine. To control this power and a range of car speeds, you must switch between gears. To explain this better, take the example of a bicycle. When you are on a bicycle and you pedal very fast in first gear, your speed rises rapidly. Similarly, if you are driving a car on first gear, you will rise to a much higher RPM in no time. The type of transmission in a car is the mechanism used to shift between gears. It can either be manual, meaning that you have to shift gears by moving the gearstick yourself or it can be automatic. Nowadays, there are several types of automatic gear technologies depending on car make and model.

[Compare car insurance in the UAE]

5) Road lay-out: This includes two-wheel drive (either front or rear wheel drive) and four-wheel drive. Basically, the type of wheel drive determines which wheels receive torque. So for example, a front-wheel drive car will have engine power delivered to the front wheels of the car whilst a four-wheel drive or “4X4” car allows all four wheels to receive torque. The importance of road lay-out is in the way your car handles on the road. For example, 4×4 cars are good for off-roading, because if you drive in a rough terrain and your wheels are only partially firmly on the ground, the other wheels will be able to move the vehicle. Also, 4×4 cars can be easier to handle as well, when going through a corner for example. [Related:The little extras that come with your car insurance policy]

Below is what a specs card typically looks like at a car dealership*: 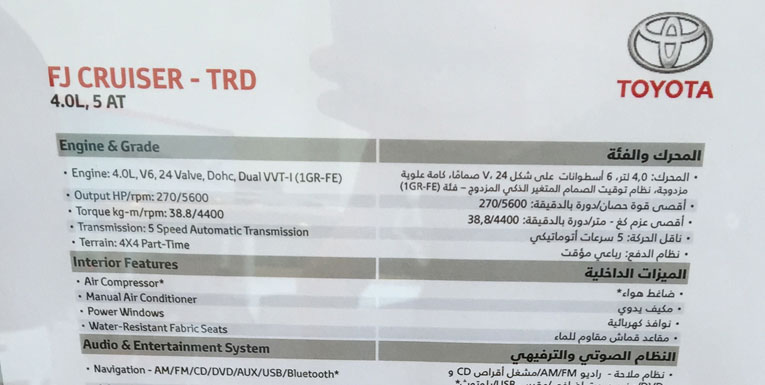 *If you’d like to better understand the specs and performance on that card, consider booking a test drive and take the car for a spin. You can now do this on Souqalmal.com:

Book a test drive of the Dodge Durango

Book a test drive of the Jeep Wrangler

6) Acceleration: this is how fast your car speed rises from either zero to 60 miles/hour or zero to 100 kilometres/hour from a standstill position. Acceleration is usually denoted in seconds.

7) Turbo charge/Supercharge: this simply means that the engine is “enhanced” to produce more power by having more air forced into it. You might see this spec included in the car model’s name (ex. Porsche 911 Turbo) or listed in the description of the car. And this can vary depending on car make/manufacturer. Some other names that denote turbo charge are “Compressor” and TFSI (Turbo Fuel Stratified Injection).

8) Electronics: There are so many types of electronic technologies that vary from car make to model and type. For example, some of these are designed to assist you in breaking or handling. Electronic Stability Program (ESP) helps keep your car from swerving when you drive on certain terrains by preventing the brakes from locking. Anti-lock breaking (ABS) systems are similar.

9) Fuel Types: this may differ by type of engine. You are probably most familiar with the concept of petrol and diesel to fuel cars. But even within petrol there are variations. For example, super cars may need cleaner petrol, higher in octanes to perform better. Also some engines may be what are called “hybrids” such as those that run on electricity.

Engine specifications can vary significantly even if you are looking at the same care make and range. To give you a general idea, the engine sizes of the 2015 BMW 3-series Sedan range from a 1.6 liter engine to a 3.0 liter and the corresponding horsepower and torque can vary accordingly: