Pokemon Go or no?

Published: 3 August 2016 | By Zara Fazili
Pokemania has hit the world. Find out why everyone's hooked to this immensely popular game.

Have you noticed people walking around, staring at their phones, desperately swiping their screens? If this sounds familiar, you have most likely witnessed the craze of the recently launched mobile game ‘Pokemon Go’ which went viral within the first week of its launch in July. Not only has Pokemon Go become immensely popular among all age groups, it also reached a record 100 million downloads worldwide over the last weekend. The game took the number one spot of free apps on iTunes, surpassing the daily users on Twitter, engagement on Facebook and also led to a surge in Nintendo shares, all in it’s first week.

So what is it that’s keeping everyone hooked?

The location-based game introduced augmented reality concept using your phone’s GPS and camera to create an interactive experience. The aim is to step out in the real world, sign up as Pokemon trainers,  catch Pokemons, get needed supplies at designated PokeSpots and train or battle in places known as Gyms.

Even though the game was officially launched in selected countries, many around the world have found ways and tricks to download the game on their smartphones. The process varies for both iOS and Android users and you might have to go through a couple of changes in your phone settings before you start playing it in the UAE. However, it’s advised to wait for the official release of the game because of potential security risks, privacy threats or damage to the operating system of smart phones.

[Compare all credit cards in the UAE and apply now]

Businesses have used the Pokemon craze to drive up their sales. Restaurants, bars, cafes, and retailers across the world have capitalized on the game to create new revenue opportunities. Below are few examples of UAE businesses making the most of this fad. 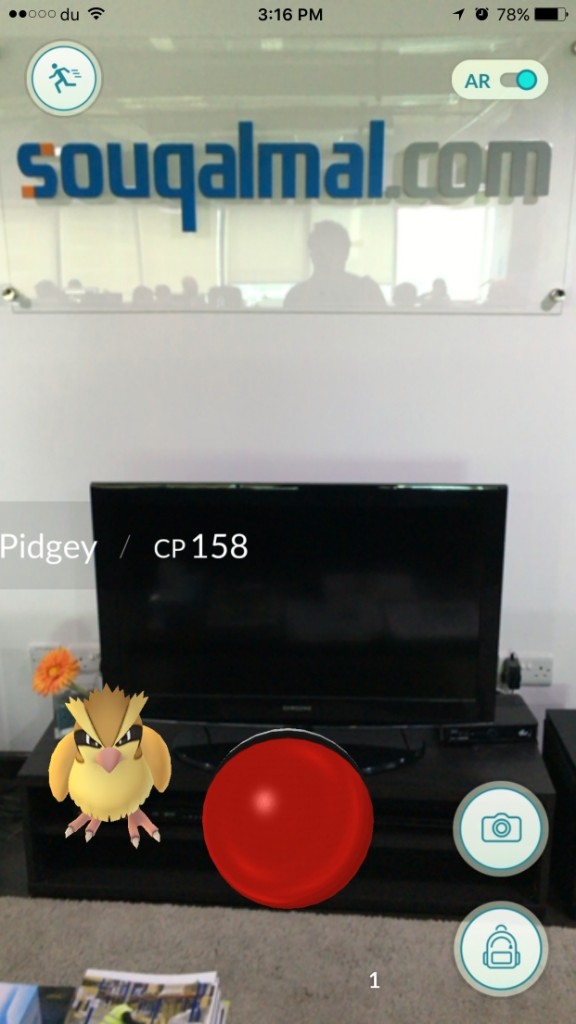 Look what we found in our office!

If you’re one of those caught in the Pokemon frenzy, by now you may have realized that the game is addictive.While some say it has encouraged people to be more active, social and explore their environment, others view it as a waste of time. Talking about it’s impact, Dubai resident Umair says:

”The game is a good incentive for those who want to be fit. You have to travel a certain distance to unlock new features, and if you choose to walk, you are killing two birds with one stone.”

”Initially I spent two hours each day trying to advance levels, but realized it soon enough that it’s a big distraction and of course drains all my cellphone battery!”

[Related: Don’t miss out on these back to school offers]

The game has also been blamed for triggering negative events such as reckless driving, careless walking leading to accidents, invading privacy and more serious events such as thefts and shootings. UAE’s Telecommunications Regulatory Authority (TRA) has warned smartphone users against playing the game because it uses your geographical location and makes the privacy of users open to hackers.

Like it or not there is no denying that Pokemania has taken over the world by storm. And if you’re looking for an easy way to advance to the next level, there are players who are selling their accounts on websites such as Dubizzle for a price ranging from AED 200 to AED 15,000 depending on the level of the game.