Published: 25 December 2014 | By Suzanne Locke
Fancy a celeb dress or handbag? Shopping-mad Dubai is turning itself into a fashion hub with help from stars like Sarah Jessica Parker and Kim Kardashian. 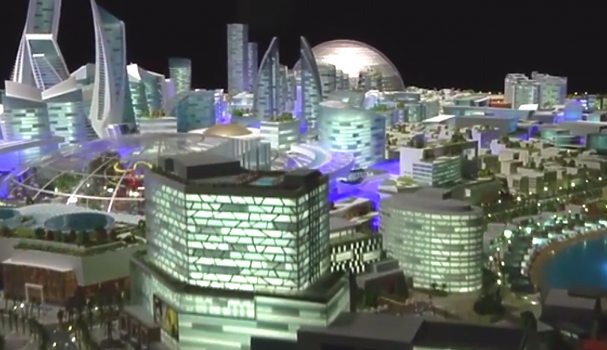 Mall of the World, Dubai - illustration

Thinking of a celeb-endorsed splurge this holiday season? You’ve come to the right place.

Dubai is building itself up as a fashion hub to rival London, New York, Milan and Paris, and celebrities are flocking to set up shop.

Sarah Jessica Parker came to launch her SJP shoe label, starting at AED 1,200, at Harvey Nichols and Bloomingdales. The UAE and Kuwait are the first international markets to hold the SJP Collection outside of North America.

The star of Sex and The City (and let’s not forget her character Carrie loves the UAE too – the second movie was partly set in Abu Dhabi) says the country has a “sophisticated population and strong relationship with fashion and shoes”.

The Middle East collection is brighter than the US version, she says, with “all these colors and ornamentations and satins”, because women are ‘bolder’ here.

Certainly it’s a city that loves to shop. The UAE is home to 40 malls, plus the upcoming Mall of the World.

A third of the $7.6bn spent in the Middle East on fashion is in Dubai alone, says Bain & Co.

And it says shopping is the third top reason for tourism in Dubai, with retail making up a third of the emirate’s economy.

Now there are ambitious plans to set up D3, the Dubai Design District, in time for Dubai Expo 2020, along with the newly-formed Dubai Fashion Council. Tecom says the first phase of D3, built close to Dubai Mall in Business Bay, will be ready by 2015.

The $1bn D3 project is to be dedicated to the fashion industry and will house design studios, boutique hotels and a promenade of shops.

When Kim Kardashian came to Dubai in 2011, she teasingly promised she was thinking of Dubai or Abu Dhabi for the fourth outlet of the Kardashian clothing store, Dash – although that hasn’t yet become a reality.

“When someone says Dubai, I think of this glamorous place. I think about the fashion,…the culture over there,” she gushed.

Sister Khloe Kardashian came to town to promote the 50-piece Kardashian Kollection for Lipsy, designed by Kim, Kourtney and herself.

Paris Hilton is another regular visitor – having, like Kim, filmed her reality show here, she ‘s been back to DJ at the Cavalli Club and to promote her Rouge by Paris Hilton handbag line at Lifestyle stores. Mischa Barton also came in 2012 to debut her line of clothing and accessories at Dubai Mall’s Rivaage boutique.

Victoria’s Secret models Alessandra Ambrosio and Adriana Lima have also made promotional visits for the lingerie brand and its UAE stores.

So too has evergreen British supermodel Yasmin Le Bon, in town recently with her latest Wallis YLB collection.

Asked if the city’s fashion-forward ambitions were taken seriously, she admitted: “Probably not, if I’m being honest. But there’s room for improvement and I think there’s a sea change of feeling.”

Save up for that splurge

Having opened her flagship store in London’s Dover Street this year, surely a Dubai branch of Victoria Beckham’s dress shop can’t be far behind?

By the way – we don’t endorse too many big-item splurges but do suggest, if you fancy a pair of SJP’s shoes or a VB dress, that you save first in 2015 and set a plan for one single splurge – in cash – as a reward… And obviously check out the sales too!